Anthony Mackie and Justin Benson play paramedics responding to bizarre deaths and injuries and all are related to a new designer drug Synchronic. But this drug doesn’t give you an ordinary high, as Mackie’s character soon finds out.

Synchronic (2019) Review | C-Squared
Subscribe to our YouTube Channel
In theaters and drive-ins October 23, this film was directed by Justin Benson and Aaron Moorhead, written by Benson, and stars Anthony Mackie and Benson, with Jamie Dornan, Katie Aselton, and Ally Ioannides.

In addition to this movie, clips in this video include: 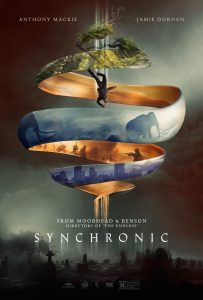 Carma received a pre-release screener for this upcoming film.

If you haven’t seen the film yet, be aware that there are major spoilers in this episode. Carma and Christopher share the plot outlines and some of the plot points that may spoil the suspense of the film. That said, much of that is also spoiled in the trailer.

Synchronic builds slowly, showing you the results of the new designer drug, but leaving you not quite sure what you’re actually seeing. Time within the film is not chronological with several flashbacks. It opens with a couple taking Synchronic together. The boyfriend leaves to get ice, as he enters the elevator, the drug takes effect and he finds himself falling in a vast desert. His girlfriend, who remains in the bed, is transported to a bayou where a strange woman looks upon her and a snake winds its way toward her leg. It just gets weirder from there.

Carma was fascinated by the time-travel aspects of the film and Christopher enjoyed the suspense. Both were impressed with Anthony Mackie’s action chops as displayed in this film.

Parental Advisory: The film includes foul language and there are a few graphic scenes of injuries. That said, this film does a good job of not showing actual gory violence. Much of the violence is implied, which is enough.

Be sure to watch for the blooper!