“I’m behind every calamity that’s ever happened to you. But to accuse me of stealing something about mystical-magical, now that really takes the biscuit.”
~ Morgan Sinclair to Danny Fremont
The Curse of King Tut’s Tomb 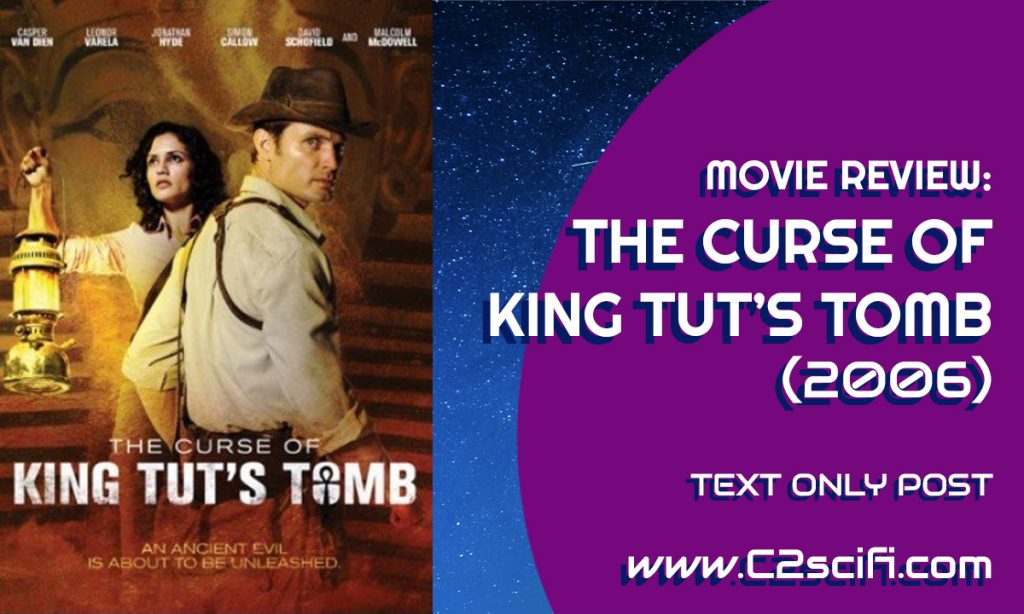 The Curse of King Tut’s Tomb was a made for TV three-part mini-series that originally aired on the Hallmark and Sci-Fi Channels in 2006. Caspar Van Dien, known for Starship Troopers (1997) and Sleepy Hollow (1999), plays Danny Fremont, a renegade archeologist in search of ancient treasures. Fremont is searching for the lost pieces of an emerald tablet that is believed to wield ultimate occult power. His nemesis, Morgan Sinclair, played by Jonathan Hyde (Jumanji, 1995; Anaconda, 1997; The Mummy, 1999), consistently snatches each piece from him and now Danny must prevent him from taking the final piece, or the world as we know it will come to an end. 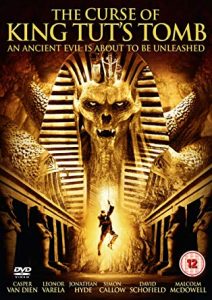 Summary of The Curse of King Tut’s Tomb:

The movie opens with Danny Fremont in an ice cave, just as he’s discovered the second emerald stone. But, Morgan Sinclair shows up and snatches the tablet away. Through dialog, we learn that this is a recurring scenario. Sinclair is always thwarting Fremont, whose reputation is now shot not only because he never gets to keep his finds, but also because of his belief in the occult nature of his archeological research.

The backstory is that King Tutankhamen was really an incarnation of the sun god Ra, who protects the Earth from the evil demon Set. In his last battle with Set, both are trapped in the Underworld, the portal to which lies within King Tut’s tomb, where the final emerald tablet is hidden.

Of course, Sinclair does get ahold of the tablet and proceeds to unleash its power and the demon Set, killing all members of the Hellfire Council, and several others in the process. The only way to stop him is to find King Tut in the Underworld. But will the Boy King be strong enough to help them after centuries of imprisonment?

Analysis & Evaluation of The Curse of King Tut’s Tomb

According to IMBD, Jonathan Hyde once described the film as “an absolutely ghastly pile of tosh” and claimed that he only took the role because he had never been to India before. (India doubles as Egypt.) I didn’t think it was that bad.

The director of The Curse of King Tut’s Tomb has some pretty good films in his portfolio, including the cult hit Highlander (1986), as well as Highlander II: The Quickening (1991) and The Shadow (1994). Hailing from Australia, he is known for his action films with quick cuts. Before working on this movie, he directed the television movie Mysterious Island (2005) starring Kyle MacLachlan (Dune, 1984), Gabrielle Anwar (Body Snatchers, 1993) and Patrick Stewart (Star Trek: The Next Generation).

Of course, the main star is Caspar Van Dien, an actor I’ve never much liked. However, I have noticed that his acting has become less wooden and a bit more nuanced as he’s gotten older. He wasn’t half bad in this movie. He embodied the wide-eyed dreamer as well as swashbuckling hero quite well.

Like other movies of the archeological adventure genre, such as Raiders of the Lost Ark (1981), The Mummy (1999), Lara Croft: Tomb Raider (2001), The Curse of King Tut’s Tomb has supernatural elements, lots of action and ancient treasures. Since I have enjoyed this type of film since I was a kid, I was not disappointed. Is it art? No. But it is fun.

I enjoyed the homages made to Raiders of the Lost Ark — Fremont has a similar costume as Harrison Ford, is an archeological professor and even mentions the Ark of the Covenant.

At first, the context threw me because Fremont discovers King Tut’s tomb, which was, in reality, discovered by British archaeologist and Egyptologist Howard Carter in 1922. However, in a clever plot twist at the very end of the movie, this is explained.

The special effects are what you would expect from a low-budget, made for TV film, however, they didn’t push me out of the story. And some of them were pretty good.

Character development was average and was at its strongest in showing the character arch of the villain Sinclair. Hyde played him brilliantly as arrogant and power-hungry.

Is this “must-see TV”? No, but it can be a fun romp if you’ve got nothing better to do or are, for some reason, a Casper Van Dien fan. The set and costumes feel appropriate for the timeline, there are sufficient action and intrigue — wait until you see the scene where Sinclair chases Andrew Walker! I was on the edge of my seat! And the humor adds a nice balance to the action.

The movie is not rated, but due to some violence and scary imagery, I wouldn’t recommend it for young audiences.

At the time of this watching, The Curse of King Tut’s Tomb was available as part of Amazon Prime. The DVD is also available for purchase.

For more reviews of television, go to our Television posts.