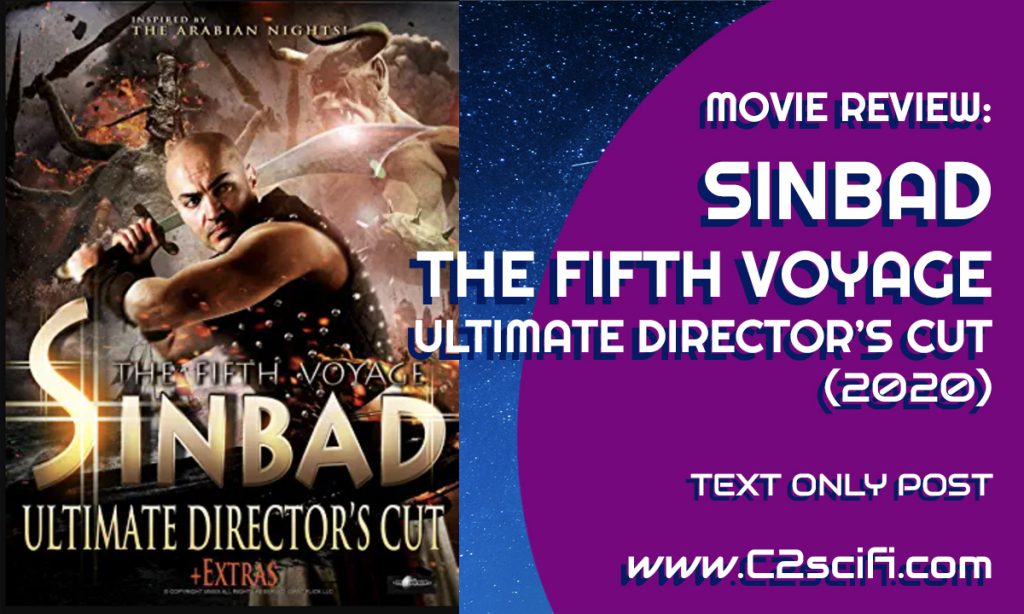 Inspired by the classic Ray Harryhausen film The Golden Voyage of Sinbad (1973), and often a loving homage to it, Sinbad The Fifth Voyage The Ultimate Director’s Cut (2020) tells yet another tale of Sinbad the Sailer. 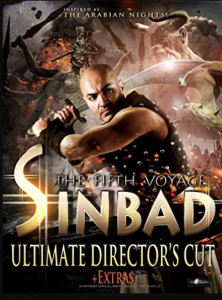 Summary of Sinbad The Fifth Voyage

An evil sorcerer has abducted the Sultan’s only child and Sinbad, who is in love with her and wishes to marry her, must save her from the evil Deev who wishes to consume her soul. Along the way, Sinbad and his crew fight a Rock, giant bugs, and other creatures on their way to save the princess.

Analysis and Evaluation of Sinbad The Fifth Voyage

Based on the Arabian Nights stories and inspired by the classic Sinbad movies of the 1960s and 1970, Sinbad The Fifth Voyage is at times a love song to Ray Harryhausen who did the stop motion animation of those films, as well as Jason and the Argonauts (1963).

Unfortunately, the editing of this film makes the story hard to follow. The movie cuts back and forth between the present (shot in dull, dark tones) and the past (usually shot in brilliant color). Sometimes I found it hard to know that I was washing a flashback until the princess shows up.

In addition, the dialog is clunky and thee acting leaves a bit to be desired. However, there are some nice moments that made it worth watching.

The original film was released in 2014 and I believe I may have tried to watch it, but it was so bad I didn’t complete the movie. I can’t be 100% sure that is the case, but many of the beats of the first 20-30 minutes of the Ultimate Director’s Cut felt so familiar, I think that may have been the case.

If so, then I’m glad Solimon did a re-cut of the film. I watched this version through to the end and found in somewhat entertaining. This is what I really enjoyed about the film:

Real belly dancers! I was a belly dancer for about three years in my 20s and find it so annoying to see fake ones in films. I appreciated the authentic middle eastern music and choreography.

Homages to Ray Harryhausen. I’ve all the Sinbad fills that Harryhausen did and loved them. Apparently, Solimon did, too — and it shows. I enjoyed seeing the recreations of several scenes from The Golden Voyage of Sinbad (the Roc, fighting with a skeleton, the cyclops, etc.).

David Light. I enjoyed his performance as both the Sultan and the Genie. He was fun to watch. You can catch him in other genre films such as The Devil Within (2010) and Soundwave (2018), as well as an episode of Space Command (2020).

The special effects were pretty good for the budget, a cut above your typical Asylum film. I liked the creature design, especially of the statue of Durga and the giant beetle creature. The dragons were pretty good, too.

There are some loose threads left unfinished — in a flashback, Sinbad is given an ultimatum by the Sultan that he can either leave never to return or marry the princess and immediately have his head cut off. So how did that change? When the princess was abducted, it was clear it was the day before her wedding, and yet Sinbad was off on an adventure to find an amulet she dreamed about. Also, when Sinbad won, what happened to the souls of his crew? They were dead, but it wasn’t clear from his wager if when he won they went off to Arabian Heaven or regained life.

Although not as good as its inspiration, Sinbad The Fifth Voyage Ultimate Director’s Cut is worth a watch if your expectations aren’t so high. I was entertained, even though I kept losing my way. If you are a Patrick Stewart (ST:TNG) fan, then you might also enjoy his voice over as Sinbad.

For more reviews of movies, go to our Film posts.