“Can we truly call this a monster club if we do not boast amongst our membership a single member of the human race?”
~ Eramus (Vincent Price)
The Monster Club 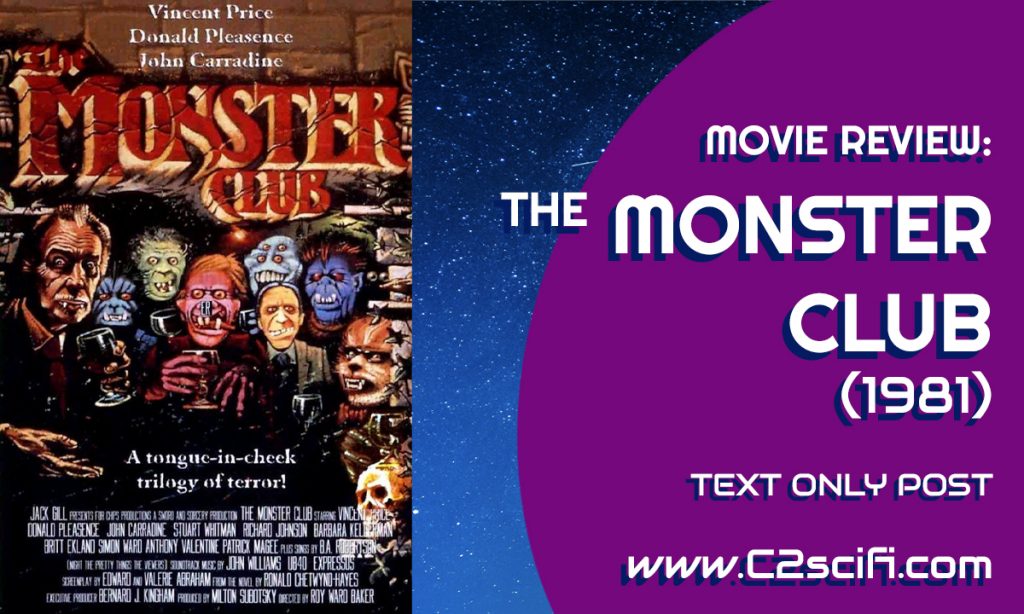 Based on stories by Ronald Chetwynd-Hayes [The Curse of the Snake God (1989) and The King’s Ghost (1985, also known as The Grange)], The Monster Club is a British anthology horror film directed by Roy Ward Baker [Quatermass and the Pit (1967) and Dr. Jekyll and Sister Hyde (1971)].

Three tales of horror are framed by a series of conversations between the vampire Eramus (Vincent Price) and a fictionalized Chetwynd-Hayes (John Carradine), as well as musical numbers performed by a variety of actual bands. 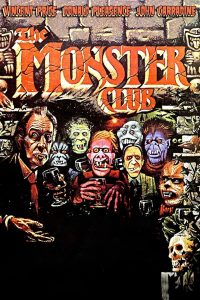 Summary of The Monster Club

The film opens with Chetwynd-Hayes walking at night near a bookstore featuring his works. He sees a man, obviously in distress, and offers assistance. The man is Eramus, a very hungry vampire. After Eramus has had his snack, he thanks Chetwynd-Hayes, complimenting him on his very tasty blood. Upon learning that his victim is an author, he offers to take him to The Monster Club and tell him some tales that may inspire his work. Befuddled, yet unharmed, Chetwynd-Hayes agrees.

Once in the club, Eramus talks about monster lineage — the three prime monsters (vampires, ghouls, and werewolves), as well as their hybrid offspring. This leads to the three stories within the larger frame story.

A shadmock is a hybrid of werewolf, vampire, and ghoul. It’s “superpower” is that it whistles, which results in whatever the whistle is directed at melting. In this tale, a shy shadmock named Raven is targeted by a couple of con artists, George and Angela, who want to steal the antiquities he collects. George is the “mastermind” and sends his girlfriend, Angela, out to befriend Raven and figure out how to gain access to is best treasures.

Raven falls for Angela, who is nice to him and actually feels sorry for him and his lonely life and asks for her hand in marriage. She goes along at first, but when he catches her breaking into his safe, he whistles at her.

A young boy wants to spend time with his father, however, his father sleeps all day and works all night. A strange man with a violin case befriends the boy and convinces him to let him into the house when his mother is out shopping. The man bursts into the house with his fellow violin-carrying companions on a quest to steak the father. Things don’t entirely go as planned, but all is well in the end for the vampire family.

A movie director is looking for the perfect place to shoot his next film. He finds a strange off-the-road village that, as it turns out, is inhabited by ghouls … and one humgoo. He befriends the humgoo in his effort to escape the village. But, things don’t entirely go as planned — what did you expect? This is a horror story!

NOTE: The trailer below has spoilers!

Analysis & Evaluation of The Monster Club

Christopher and I found this on Amazon Prime one evening while looking for something different to watch. Seeing that the cast included Vincent Price, known for such so-bad-they’re-great classics as The Abominable Dr. Phibes (1971) and Theater of Blood (1972), John Carradine [The Mummy’s Ghost (1944) and The Unearthly (1957)], as well as some other recognized faces, we couldn’t resist checking it out. I believe Christopher fell asleep through much of it, but I soldiered on.

The Monster Club proves that Price can say about any lines with panache. The drivel he had to spew about the various hybrids made me cringe. But, Price is still riveting. That said, before I saw this film, I thought that there was pretty much nothing that Price and Carradine could not do. I was wrong. They can’t look comfortable dancing in a night club surrounded by people in very bad monster masks.

Although I could find some interest in the story part of the frame, I really could have done without the musical performances. They seemed to last forever.

This was my favorite story of the three. James Laurenson, who has mostly done television work, portrays Raven with such empathy. I felt sorry for him. He is lonely and afraid of getting angry because of the results of his whistle.

It was fun seeing two actors I know from James Bond films playing different roles in this tale. Donald Pleasence (Blofeld from You Only Live Twice) is quite funny in his role as Pickering, the lead vampire hunter. And Britt Ekland (Goodnight from The Man with the Golden Gun) makes a great wife and mother who can be loving, scared and even snarky.

I liked this one the least. It was slow-paced and, frankly, I really didn’t care about the characters. Stuart Whitman (Jonathan Kent in the 1988-1992 TV show Superboy) plays an arrogant, although, at times, heroic director. Despite his desire to help out the humgoo, I still think he was too much of an ass for me to really care if he escaped or not.

If you’ve got nothing better to do, this could be an interesting romp. It was fun to see Price, Carradine, and Pleasence chew up the screen.

At the time of this watching, The Monster Club was available as part of Amazon Prime. The DVD is also available for purchase.

For more reviews of movies, go to our Films posts.