“It was a mistake to abandon our world for this dream world. My greatest mistake. A mistake we must correct.”
– Kym Minamoto (Zoe Doyle), EXT 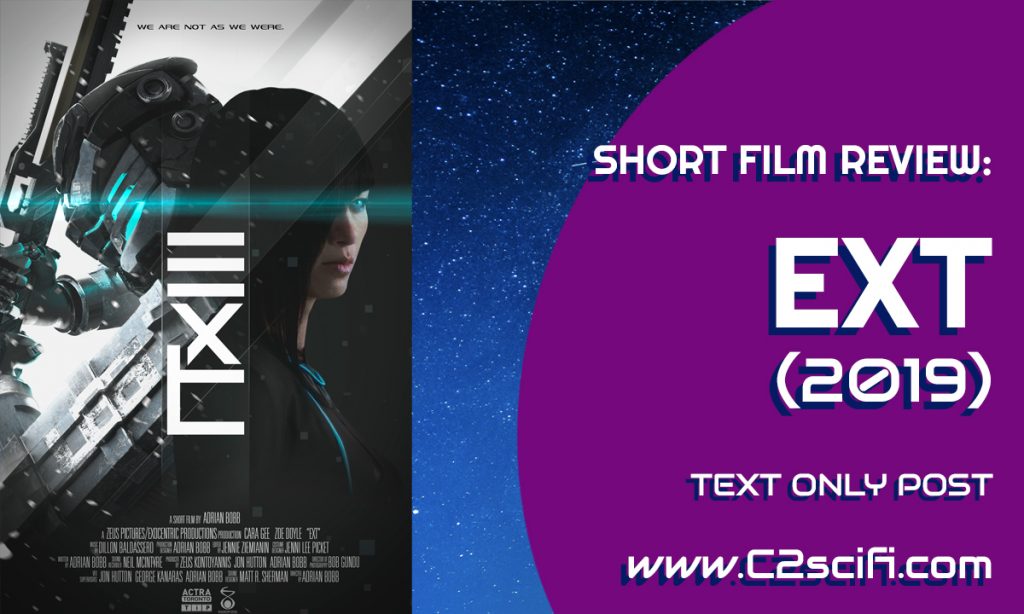 The film most recently screened at the San Antonio Film Festival, held October 11-15. 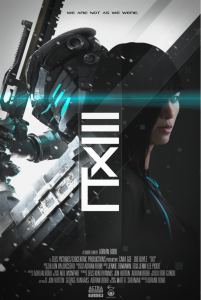 Set in a future world in which humanity had abandoned the real world for a digital one, the creator of the virtual world, Kym Minamoto, has rebelled against it. She and others have become The Vitruvian Men and they are bent on returning “reality to its true form.”

The film goes back and forth between Minamoto’s interrogation by her code-spawn daughter in the virtual world and a battle between humanoid robots and mechanized robots in the snow-covered real world.

Analysis and Evaluation of EXT

As a proof-of-concept, this short film leaves you wanting more.

The visuals are stylized and beautiful.

The real world is stark, the blue-black of the robots contrasting with the white of the snow-covered landscape.

Alternately, the virtual world is warm with browns and golds.

I loved the costumes and make-up, as well. Kym wears a kimono with Japanese style hair and make-up. Her daughter, Aegis, is dressed in black with blue accents uniform and has an asymmetrical haircut that covers one of her eyes.

On IMDB, Bobb’s has worked primarily in effects. He’s worked on several SyFy Channel projects, including The Expanse and Killjoys. EXT is his second short.

“While all of my biggest influences in sci-fi dwell in the 80’s and 90’s,” said Bobb, “I find that the conversations about technology haven’t quite kept up to where we are in the present. I feel we are ill-equipped in conversing about modern technological issues because it’s not reflected as being ‘real’ in our pop-culture.”

He said that EXT was, in part, inspired by The Seven Samurai. And you can see it hinted within this short film

I hope this short does well and that Bobb will expand it into a full-length feature. Some of the story’s points — which I learned from reading the press material and IMDB — don’t come through in the film.

That said, I enjoyed watching it multiple times. It is intriguing and draws you in. My fingers are crossed for a longer version.

For more reviews of movies, go to our Film posts.