What would you do if you found a portal to myriad alternate realities? Would you plunder those other-worlds for money, ideas, a piece of ass? Parallel follows a group of friends as they navigate the numerous opportunities presented by having such a portal in their attic…and the consequences of their actions.

[three_fourth] Noel, Devin, Josh, and Leena are a group of 20-somethings who have created their own app development company. But when their latest creation is pulled out from under them by an acquaintance, they start to fall apart. In anger, one of them throws something at the wall in the laundry room. Through the whole in the wall, they see a secret stairway and tear down the rest of the wall to explore. The stairway leads to the attic, and in the attic is a stand-up mirror bolted to the floor. Soon they discover that the mirror serves as a portal to a “multiverse” and that time moves more quickly there than here.

At first, they use the time differential to out-fox their acquaintance and win back the contract. But they don’t stop there, and soon discover that importing knowledge from the other side in order to better their lives brings increasingly dangerous consequences.

Parallel will be available in select theaters and on demand December 11, 2020. 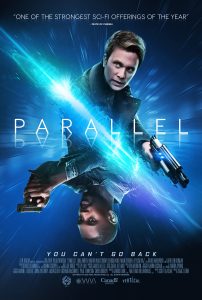 I’ve Seen that Person Before: Past Work of Parallel‘s Cast

Audio-Only Version of the Parallel Episode