When you hear a title like Battle in Space: The Armada Attacks! certain expectations are set up. You expect, oh, I don’t know, perhaps a battle in space? Maybe an armada attacking? Perchance some cardboard characters delivering over-blown dialog and enacting some insane plot?

You certainly wouldn’t expect what you get in Battle in Space: The Armada Attacks!.

The first concerns a cynical, down-at-his-heels ex-cop turned private eye, who searches for a kidnapped child and redeems himself in battle with alien invaders; the second, “The Hermes,” involves two psychic warriors infiltrating an enemy base and stealing a powerful crystal; “The Agamemnon” details a manned mission to Mars, and one man’s descent into madness; “The Persis” is a battle of wills between a cyborg soldier and his fully-organic co-pilot, one of whom has been brainwashed – but which?; and “The Caronte” is a young woman’s race against time and enemy aliens as she seeks to justify her kid brother’s faith in her.

While each vignette is well-written and fairly well-acted, audiences are strongly cautioned: this film is NOT the fun action-packed space opera its publicity and trailers imply. Caveat emptor. 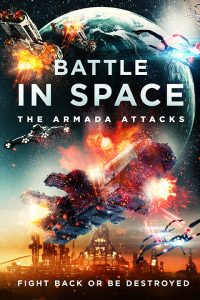 Rating for Battle in Spence: The Armada Attacks!:

Audio Version for Episode 14: Battle in Space: The Armada Attacks!